Number 1902: Masked Marvel to the rescue 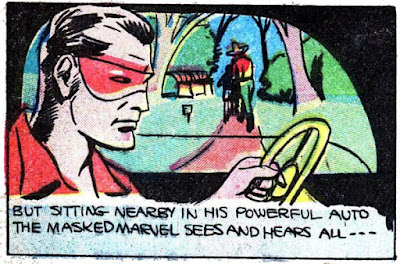 Crooks threaten to blow up 10,000 people and some buildings. Yet instead of getting after the terrorists and thwarting their evil plans, the police chief allows the Masked Marvel to go after them. “I’d hate to lose ten thousand people,” says the chief. “Maybe I’m foolish, Marvel, but I’m betting on you -- the lives of ten thousand people are in your hands!” Gee, shouldn’t the chief notify the mayor, or the FBI or somebody? I think that top cop may be overstepping his bounds.

But of course the Masked Marvel comes through. Without trying to ruin the story for anyone, you can see how this one is going to end long before the last page.

The Masked Marvel was created by artist Ben Thompson in 1939 for Keen Detective Funnies. This story, reprinted from Keen Detective Funnies #24, comes from the Marvel’s own comic book, Masked Marvel #1 (1940). Like the Fantom of the Fair, who we showed in April,* the Masked Marvel has no origin, no discernible reason for wearing a mask, and what powers he has are ambiguous. As Toonopedia.com explains: “ . . . he didn't even have a wimpy secret identity or, in fact, any secret identity at all. He just showed up out of nowhere, did a good deed or two, and went back where he'd been. Since he had no outside life, it's a mystery why he even bothered to hide his face . . .  The character got around by flying, but not under his own power — he used an ordinary-looking airplane . . .  He also wasn't particularly invulnerable. In fact, he had no defined super powers at all. He was occasionally seen to carry a gun.”

With that sort of lead-in I’ll bet you readers can’t wait to read this pulse-pounded thriller! The best I can offer, in my feeble attempt to justify posting this, is that Masked Marvel, although short-lived, was one of the very early costumed heroes. 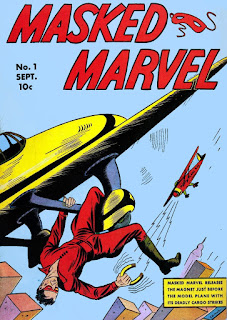 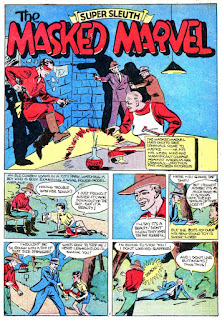 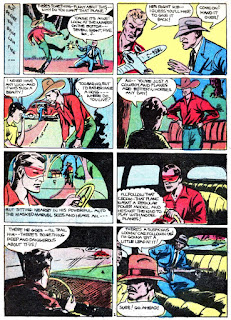 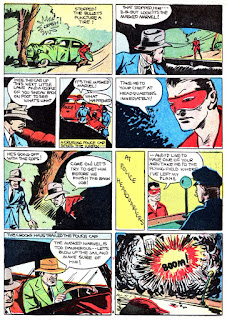 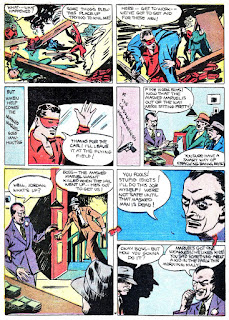 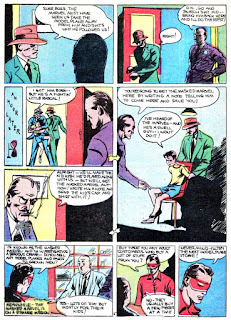 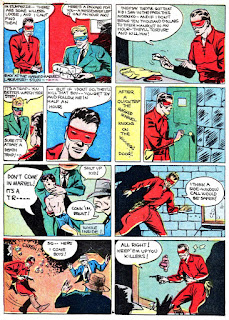 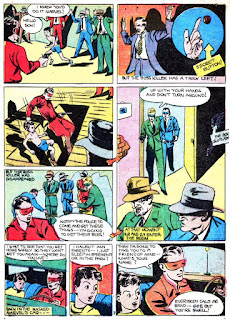 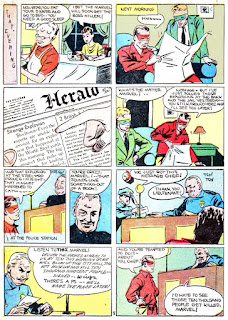 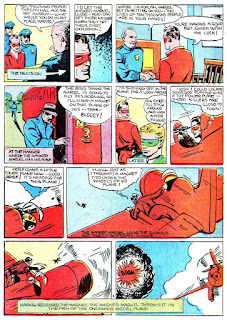 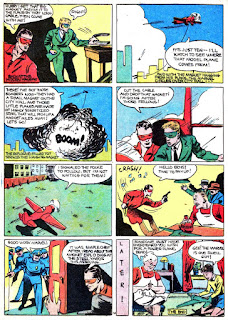 If City Hall and the people who worked there were wiped-out, then the Chief of Police would be the highest-ranking municipal authority left. That realization could go a long way to explaining why he might not get City Hall evacuated. Perhaps he didn't evacuate the museum simply because it would look bad to have done that and yet have evacuated City Hall; or maybe he just despised those artsy types, who would have no place in the order of which he dreamt.

The idea that the fields associated with a few small magnets wouldn't have been utterly swamped by other fields — such as those from the transformers of the electrical power system, or just the incidental magnetism of various things — was silly. (And the circuitry required to recognize the signatures of specific fields would have been out-of-reach for some decades to come.) But I guess that almost none of the readers would have understood that point.

This is just the "basic" comic book story.
The kind of story a 9 years old kid could conceive. And I think it's wonderful.
Why the kid meets a cowboy in the first panels? I thought the cowboy was the Masked Marvel or at least involved in the plot but no, it's just that this way we can read that he would rather have a "hoss" instead of a a plane model.
And it goes on and on like this, every page.
"I'm the Masked Marvel, I fight crime. No, I'm not in the World Wrestling Federation. Can I check your files, etc.?" "Sure!"
And some wonderful language, too! "Buttinsky" for "meddler"? "Butt-In-Sky"?
You just made my day :D

There was a Republic serial by the same name, but there doesn't seem to be a connection. This Masked Marvel wore a bussiness suit with a domino mask (Looked like the Sprit!).

Gordon, I don't think I've seen the Masked Marvel serial, but the name "Masked Marvel" seems kind of a natural, and sounds generic, like a description rather than a name (calling Batman and Robin "the dynamic duo" for instance.)

J D, "buttinsky" is a guy who inserts himself into a situation, generally where he is not wanted. "Butting in" means the same. The "sky" on the end is to make it sound like a Russian word, which sounds funny to us.

I like your deconstructing the word as "butt-in-sky," which is also funny.)

Dan'l, your points are well taken.

What fascinates me about this story is the casual reference to mass death. A writer could only come up with such a situation to create a need for action by the hero. But he would lose some control over the story if he showed the Army, the state troopers or the FBI getting involved. So he settled on a much more simple, completely unbelievable solution. That was also true in many hero pulp magazines, too. How often did the Spider take on villains who had caused mass casualties? (Rhetorical question...but of the Spider novels I read, the answer would be several.)