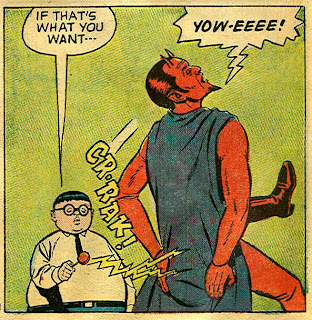 
Herbie Popnecker might've been the most unlikely character ever to star in his own comic book, but in the 1960s he was not only a hit in several issues of Forbidden Worlds, he was spun off into his own series. His title ran for 23 issues until the issue dated February, 1967. By that time the American Comics Group was running on fumes and soon after shut down operations. I read Herbie and thought the stories were completely bizarre. In retrospect, perfect for the 1960s and the dawning of the psychedelic era.

This particular story was the last story to feature Herbie in the anthology comic, Forbidden Worlds. Herbie moved into his own book after this story.

A couple of things really worked in Herbie, the aforementioned bizarre storylines--unlike anything else being published--and the wonderful solid artwork of Ogden Whitney. Somewhere I read that Whitney, who is apparently now deceased, was an alcoholic, but I've been unable to trace that story. If he drank he didn't drink and draw, because studying Whitney's inking is a study in a rock-steady hand.

Most, if not all, of the articles about Herbie usually have looked at the book from a strictly literal viewpoint. In other words, they have just accepted the fact that Herbie could walk in the air, knew all sorts of famous people, could talk to animals, or as in this story, could descend to hell and beat Satan. Perhaps Herbie was prone to hallucinations. I don't think Hughes wrote it that way, nor did Whitney (who reportedly based Herbie on himself as a boy) draw it that way. But that's what it looks like to me.

In this particular story, "Herbie Goes To The Devil," Herbie not only sells his soul to the devil, he acts in the movie Cleopatra* with Elizabeth Taylor, and more importantly knows everyone, knows how to handle every situation, and can walk on air. Not bad for a "fat little nothing," as his verbally abusive father calls him. But what if Herbie is hallucinating? The story is straightforward up to this panel, where Herbie is sitting in class, "thinking." To me it's almost the best panel in the story because Whitney has, with very subtle drawing, indicated that Herbie is spacing out. After that I consider the rest of the story to be pure hallucination. Trust me on this. I know what I'm talking about.** 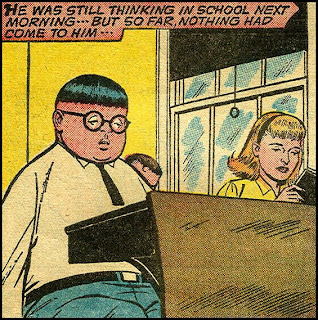 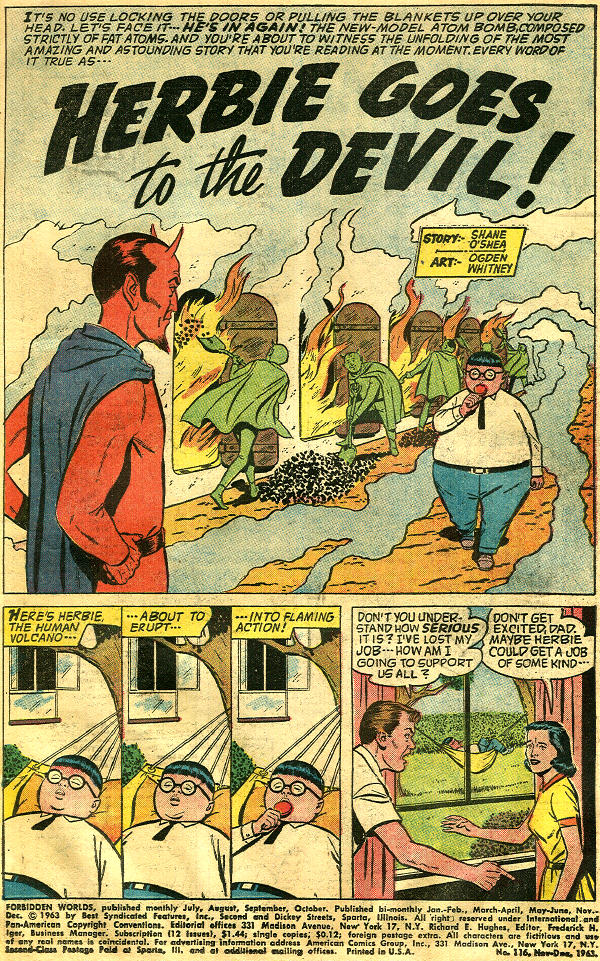 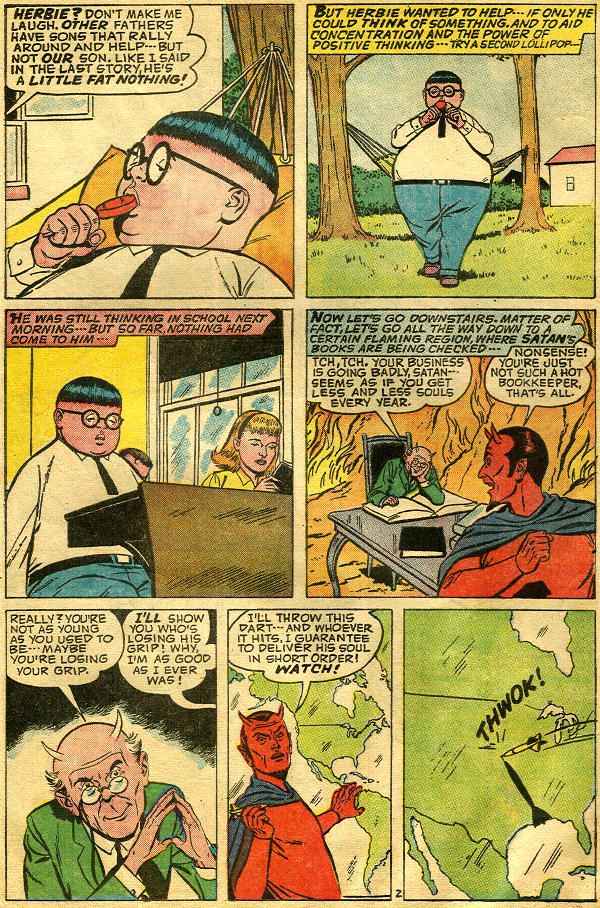 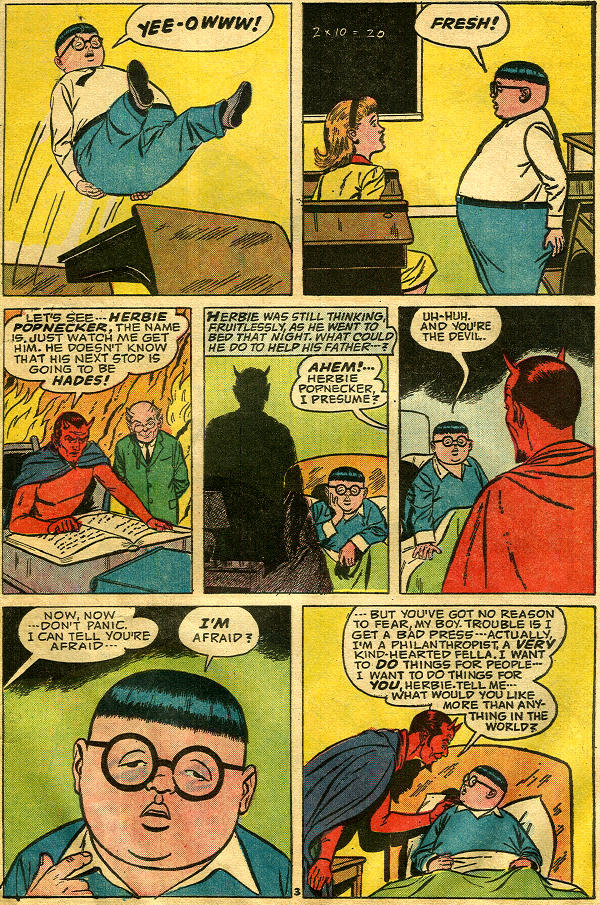 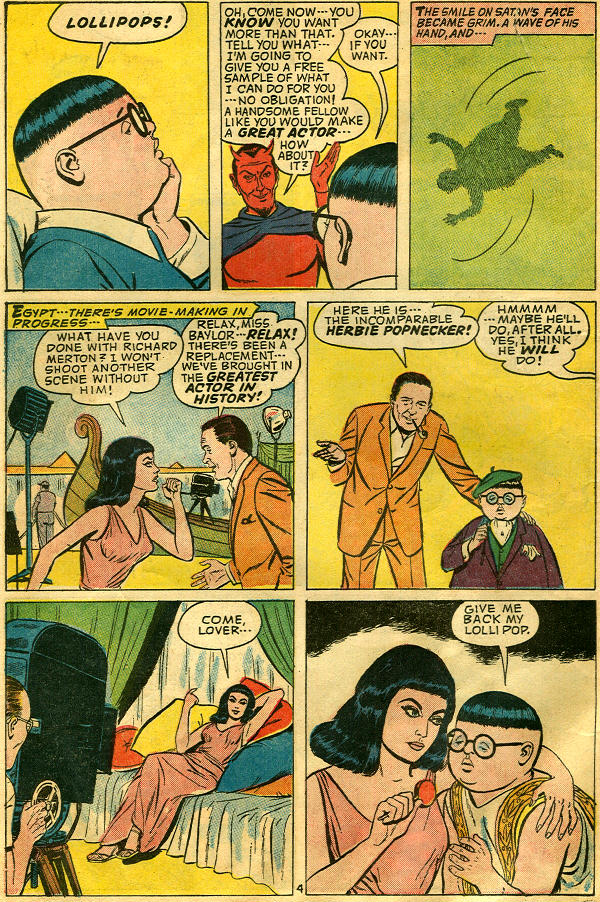 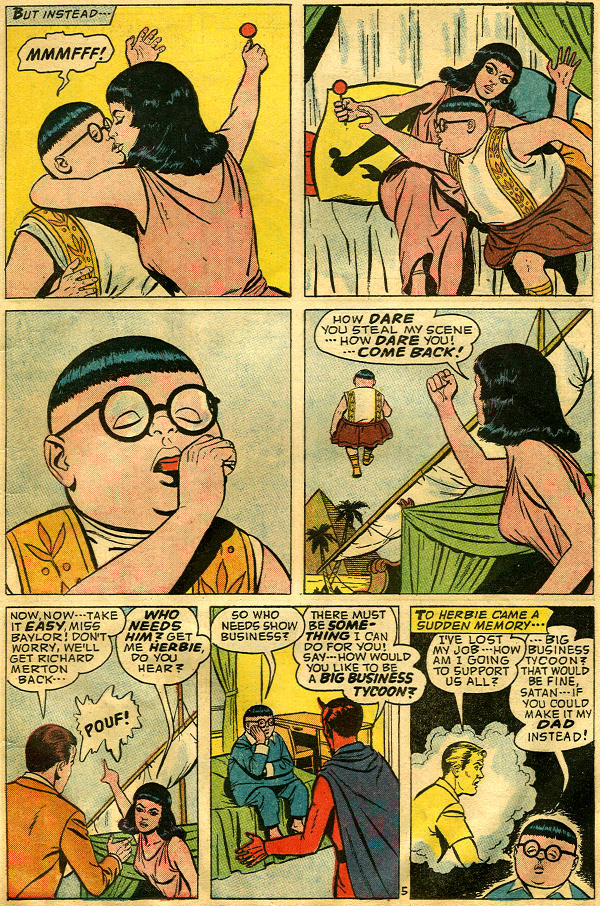 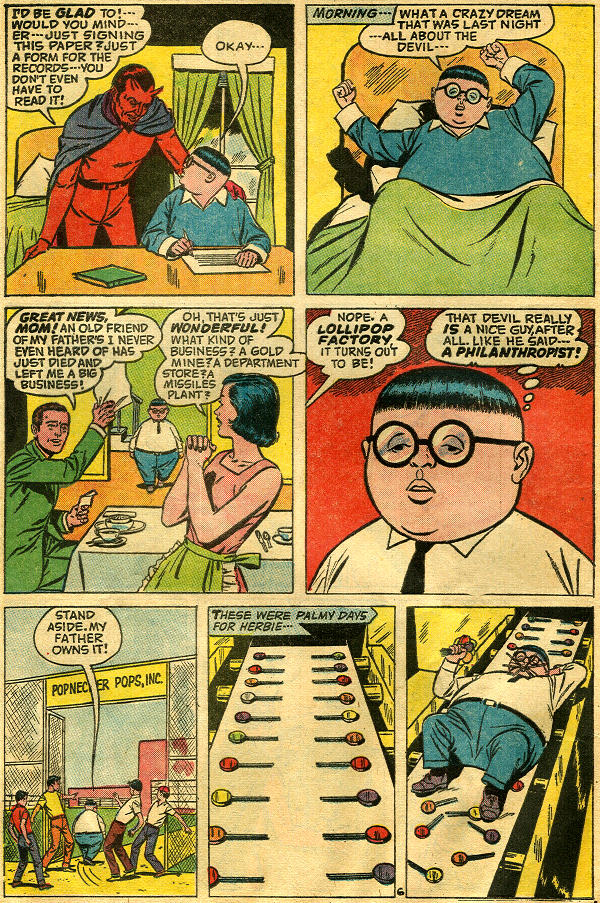 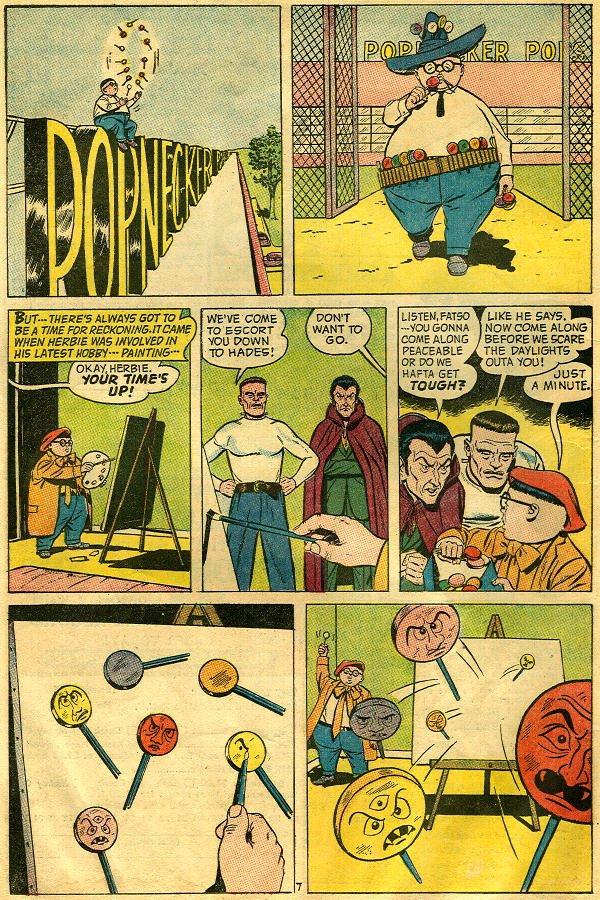 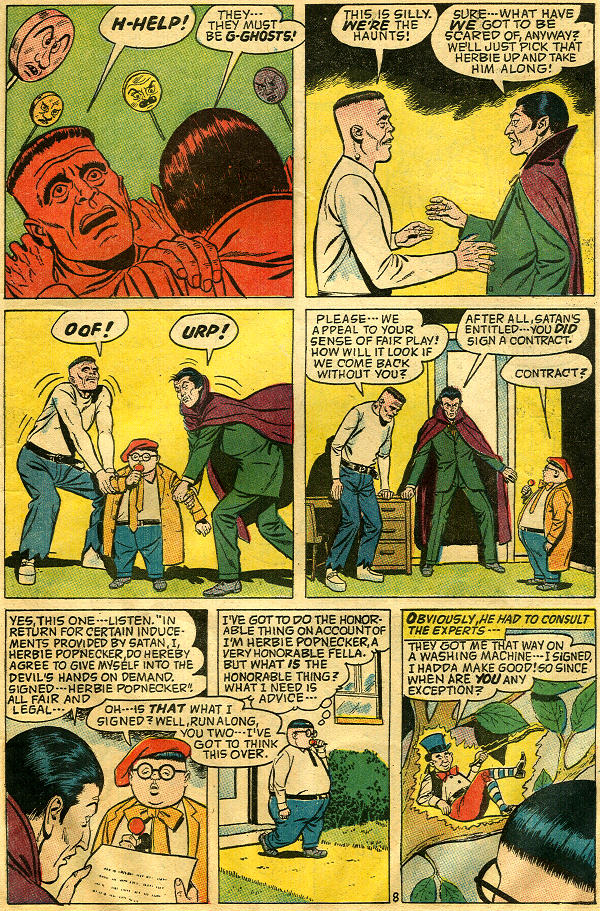 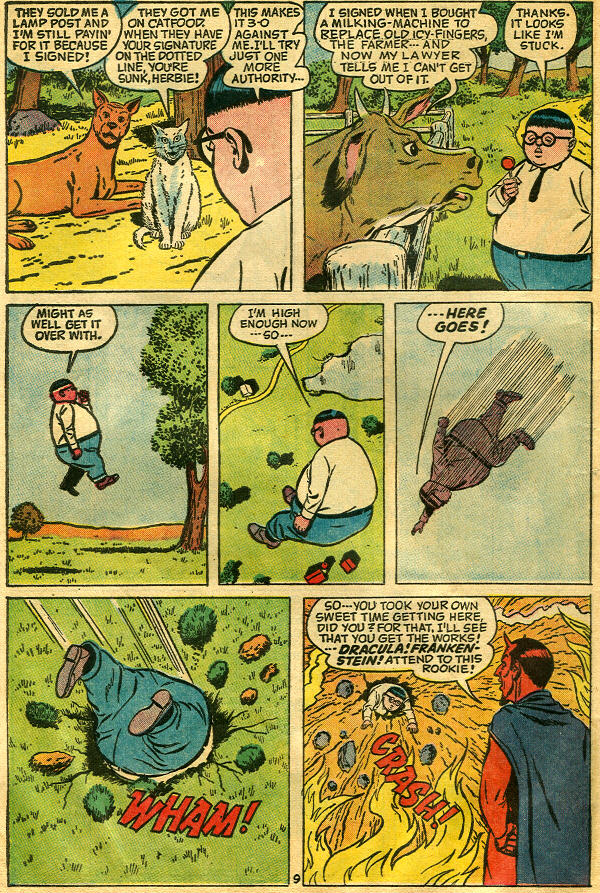 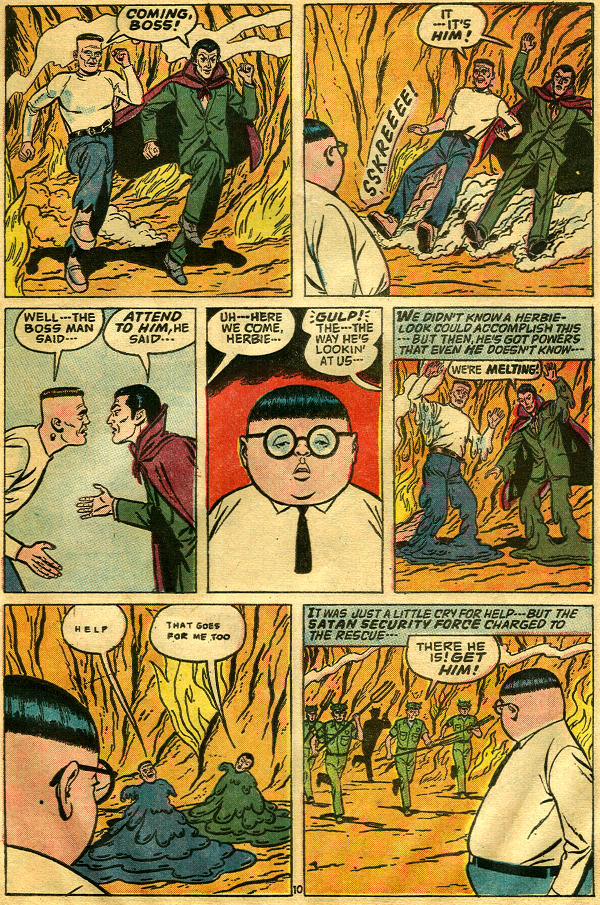 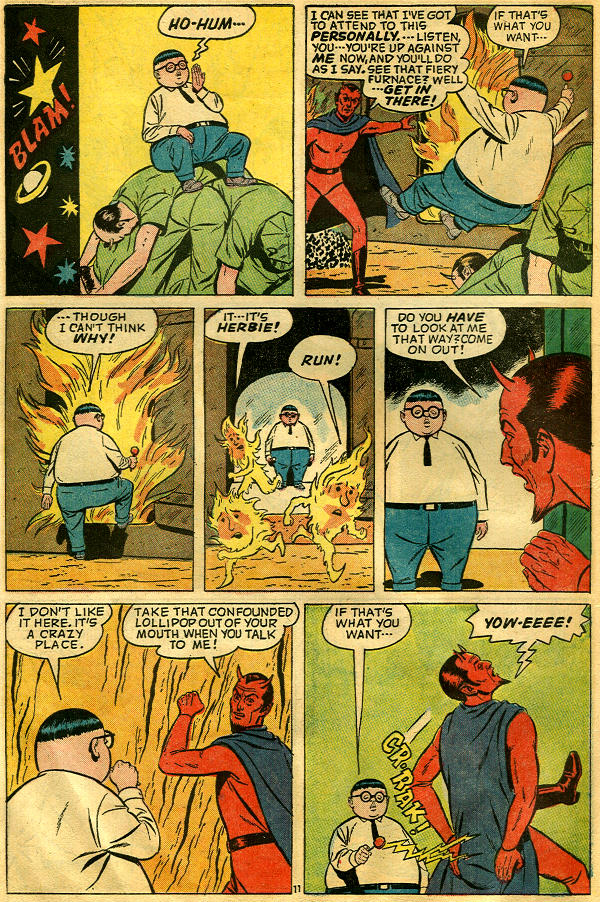 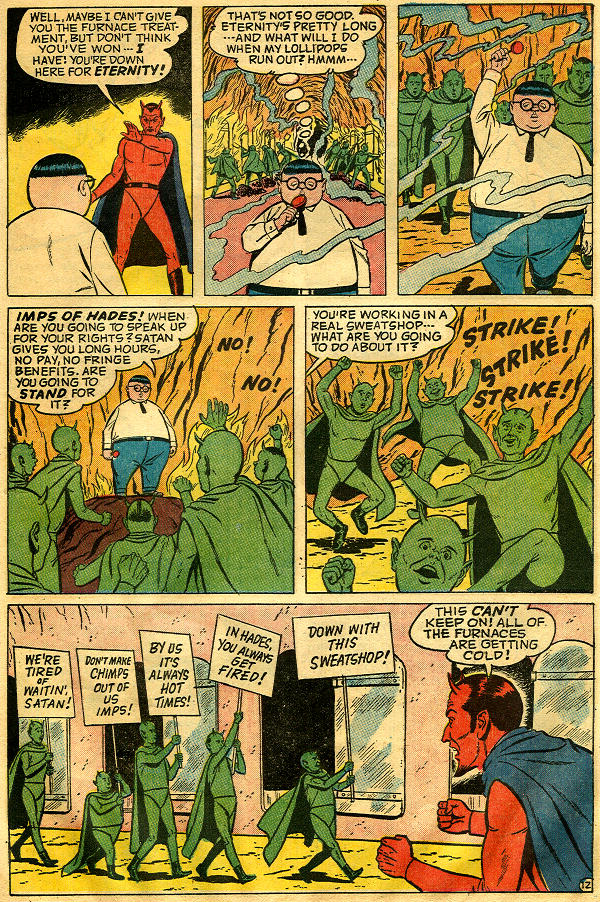 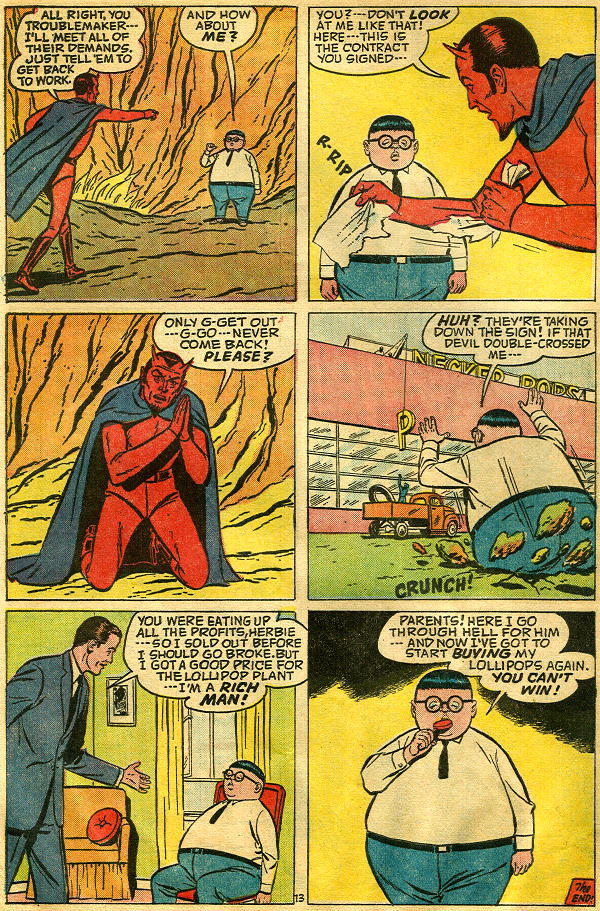 On another matter, I'd be surprised if editor/writer Hughes didn't get some feedback from conservative Christian groups, if any of them were reading comics, that is. The storyline using the devil as a funny character seems almost sacrilegious to people who would have Satan, "the adversary," as part of their theology. He's handled in this story in a very flippant way. But then, since we know now that Herbie is hallucinating, even Satan can act any way that Herbie wants him to act. After all, it's Herbie's fantasy, and we're just looking in. 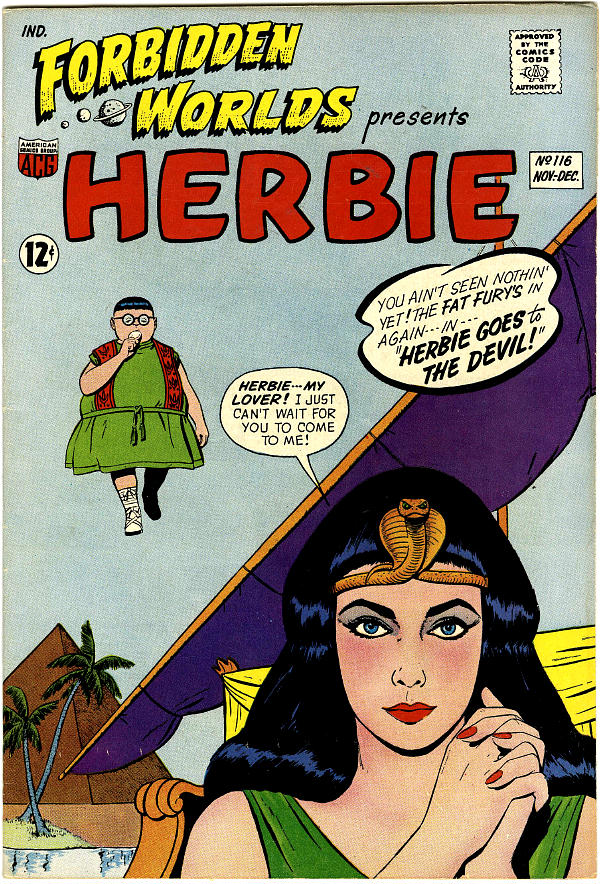 *In the early 1960s the movie, Cleopatra, was a scandal-plagued, costly production in the grand scale of that era's blockbuster movies. Elizabeth Taylor, married to singer Eddie Fisher (after "stealing him away" from Debbie Reynolds in another scandal), was having an affair with co-star Richard Burton, whom she later married. So the production was a natural to feature on the cover of a Herbie comic book. After all, it was on the cover of every other magazine of the time as well. It also might have gotten the interest of conservative groups who'd wonder why Taylor, considered an adulteress and condemned from the pulpit, was featured on the cover of a comic book sold to children.

**Update, May 14, 2014: When I wrote this post in 2007 I immediately got a couple of e-mails which pointed out to me that Herbie was not hallucinating. I agree. But for some reason saying he was seemed like a good idea at the time, and still does. But take it as a joke. After all, I know that comic books are reality and hallucinations are fantasy.