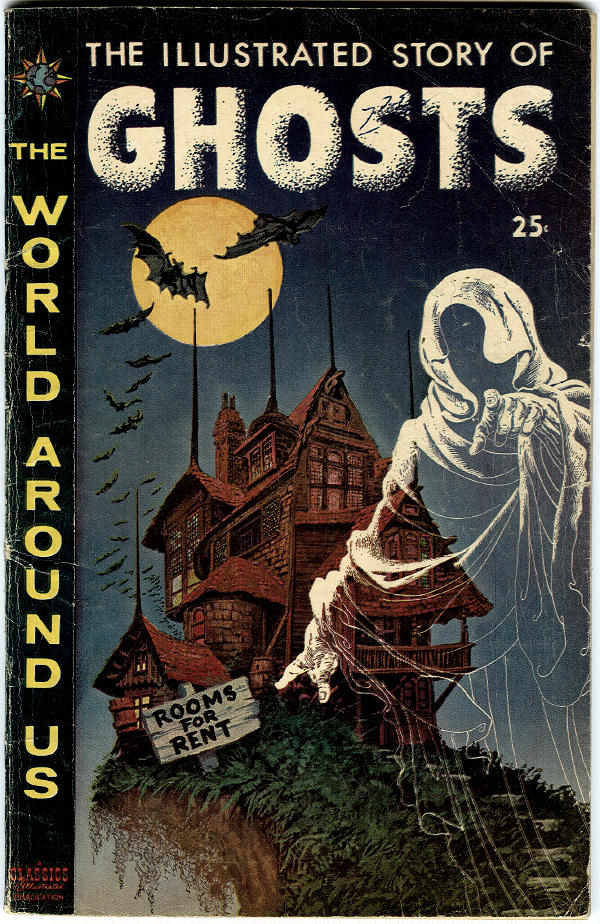 
George Evans And The Vanishing Hitchhiker

In a couple of Pappy's previous blogs we've shown some of the work that EC Comics' most revered artists did after the line folded. George Evans (1920-2001) found work in comic strips, but also did a stint at Gilberton for its Classics Illustrated line.

In 1960 when I picked up this issue of the Classics Illustrated World Around Us series, The Illustrated Story of Ghosts, I didn't know Evans' work. When I started collecting EC's and went back to this comic I put two and two together, that this was the same great artist. Evans' art is most easily recognizable by what fans spoke of as the "George Evans eyes." He used a mirror on himself to draw facial expressions, and apparently he had very expressive eyes.

When I read this comic originally it was the first time I'd encountered the story of the vanishing hitchhiker, which is one of the most venerable ghost stories in American folklore. As Page 7 of this story shows, the story has legs; it's been around a long time in many variant versions. Years later I read histories of the story in two great books, Things That Go Bump In The Night (1959), by the folklorist, Louis C. Jones, and The Vanishing Hitchhiker (1981) by Jan Harold Brunvand, a University of Utah professor who specializes in folklore. Both writers are excellent and I recommend these books for broad and very entertaining overviews of the story. 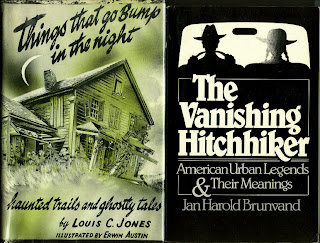 The Illustrated Story Of Ghosts version is told in a matter-of-fact narrative, without any excess dramatic flourishes. Its greatness lies in Evans' skill at illustration. His panels depicting a rainy night in a rural area are very evocative. You can feel the dampness and the cold. There are panels that tie into each other. In the top right panel of page 2 the girl and the doctor are both smiling, and yet in the final panel of the page they share exactly the same serious expression (presumably from Evans' mirror work). The girl's melancholy is easily read, and leads to the ultimate tragedy of the doctor's strange experience, as once again her parents are made to explain her death, just as they have done many times before.

Nineteen-sixties music fans will recognize a variation of this story as the basis of the song "Laurie (Strange Things Happen)" by Dickie Lee.

At the time this story was drawn Gilberton's pay rates were the about the lowest in the depressed comic book industry. Many artists (and at least a couple in this issue) took the easy road with little detail and unimaginative layouts, but George Evans probably couldn't draw that way. He gave it his best, and when George Evans was at his best hardly anyone was better. 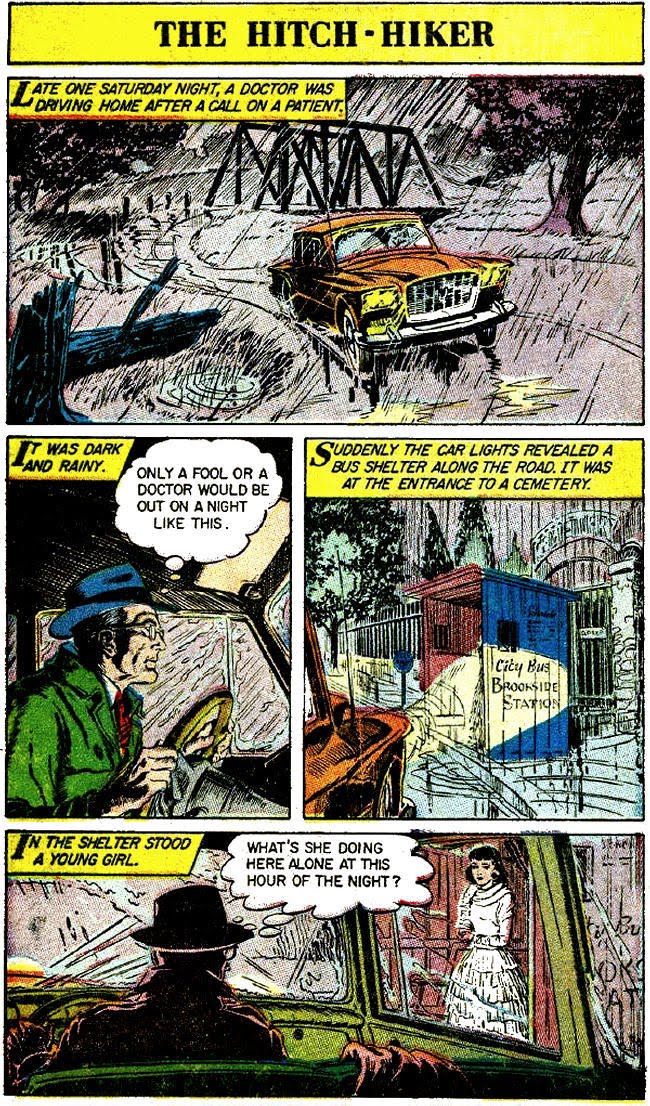 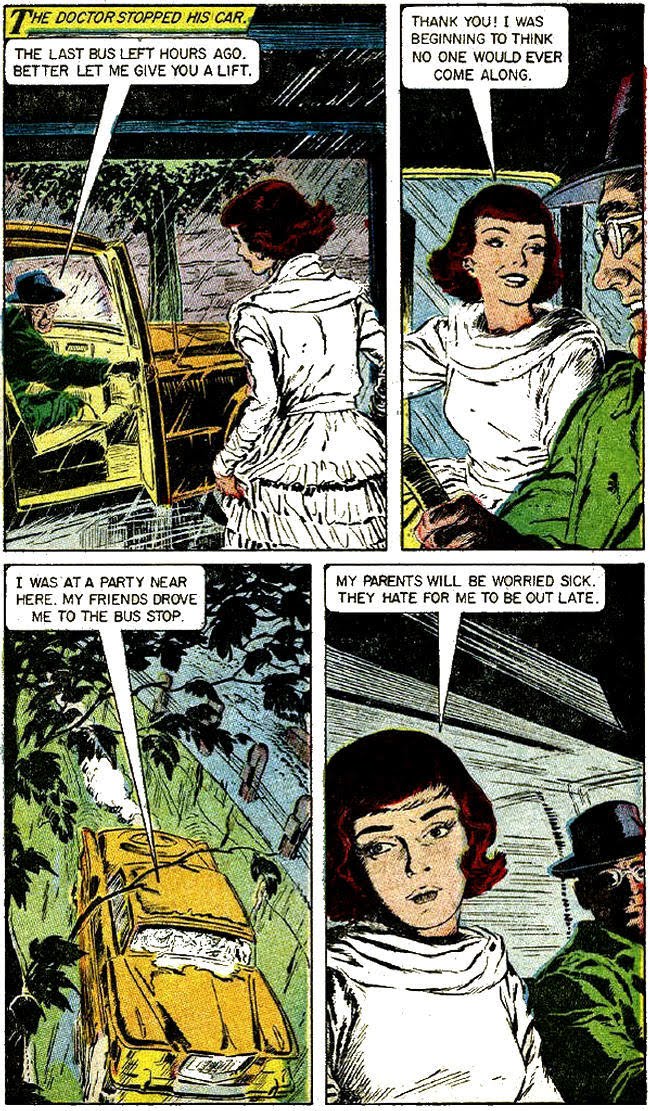 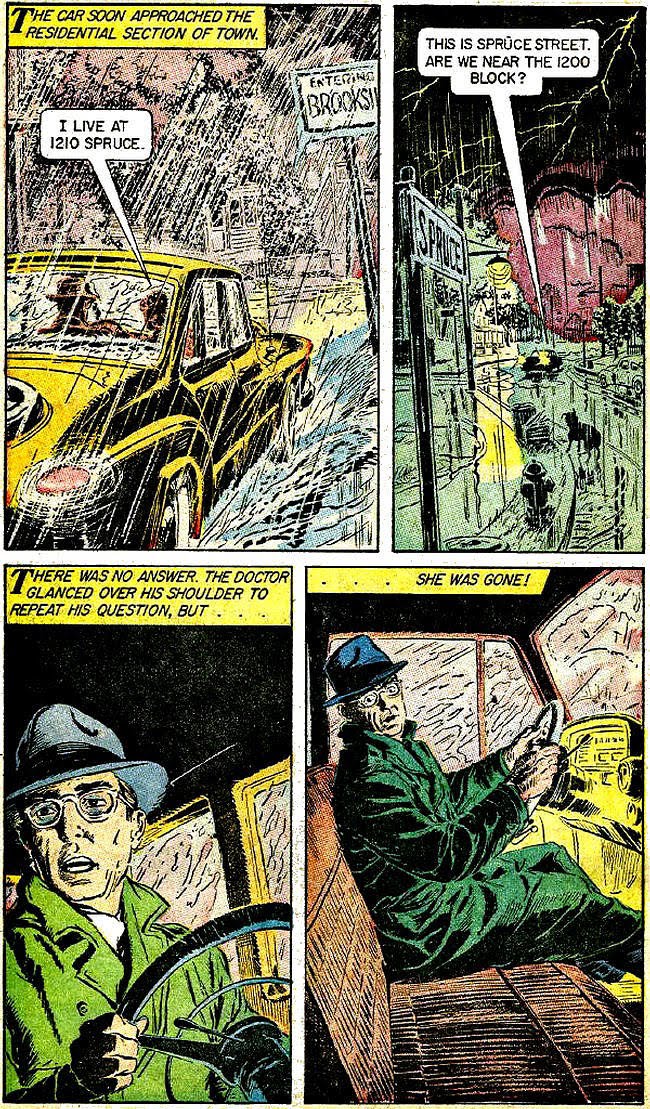 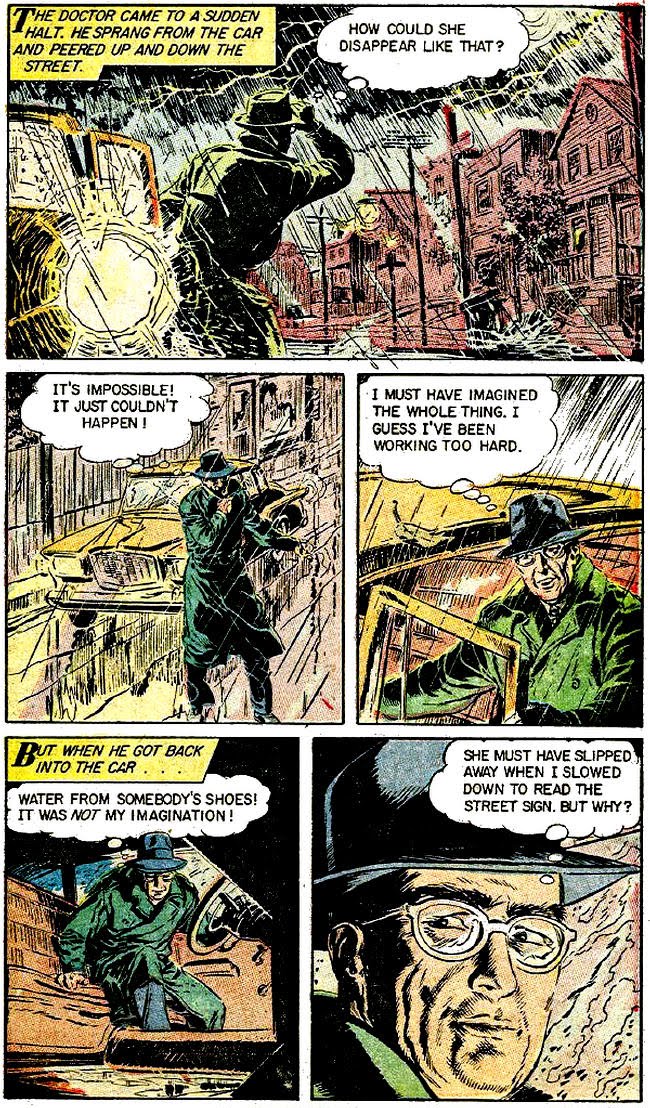 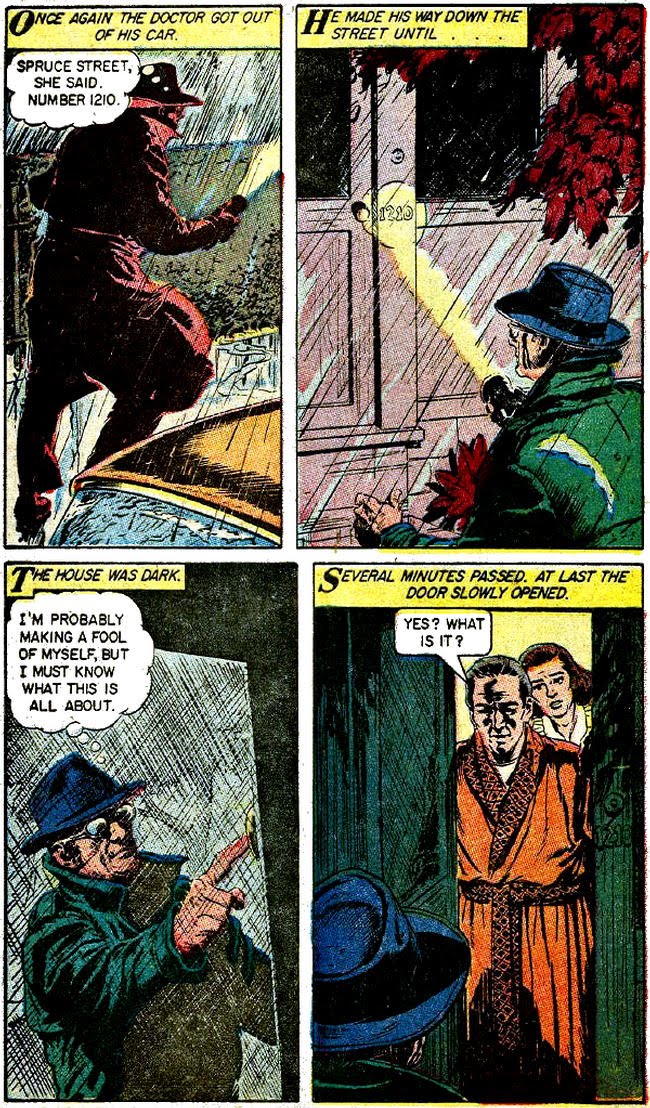 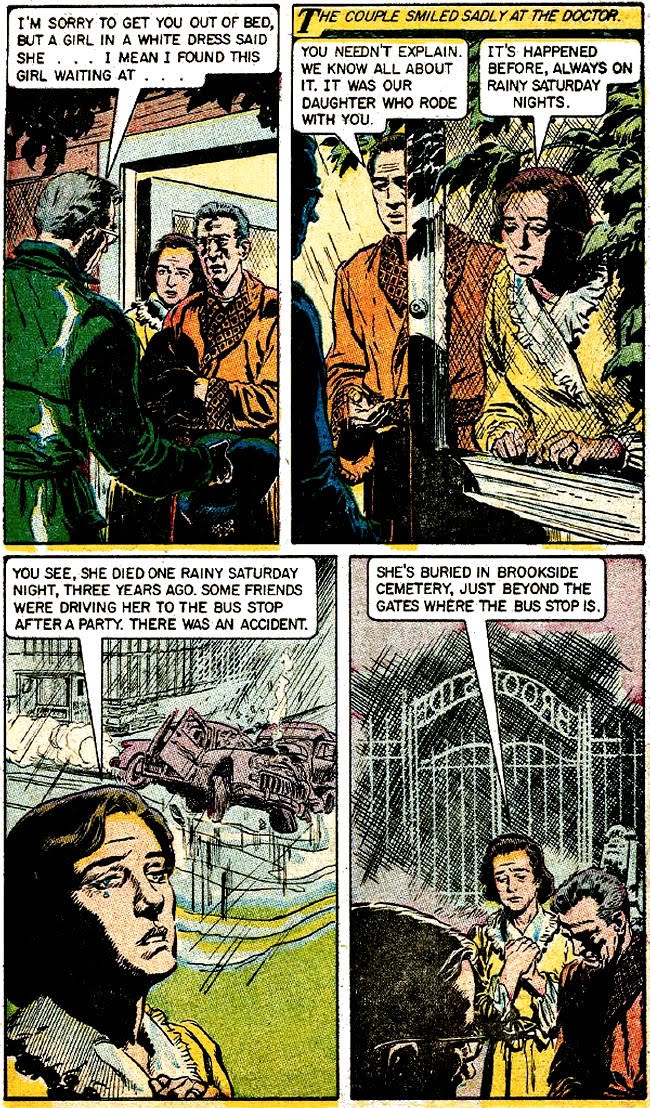 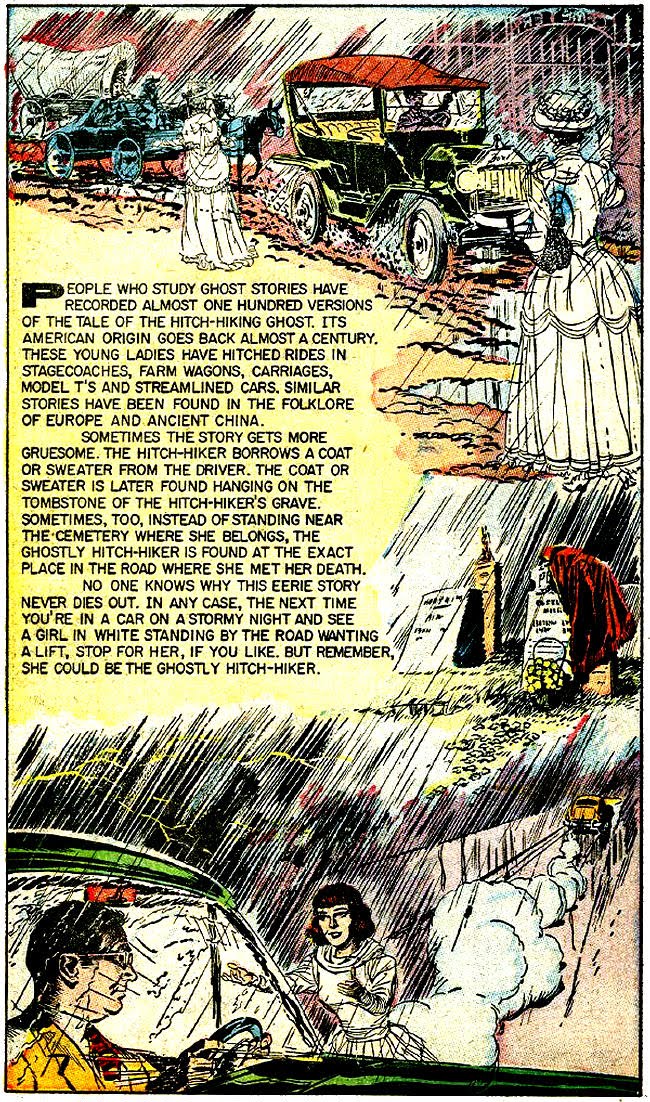 Most people like to feel vanishing hitchhikers're just urban myths, and as a non-driver I can't claim they aren't, but as someone prone - since infancy - to interacting with or observing 'people' resembling the likes of Victorians, Roman soldiers, or Elizabethans, who one moment're there, the next they're not, I can verify the experience is probably real.

I can also verify the driver's reaction's extremely accurate because as you get older you try every way you can to explain what seemed to occur 'rationally', telling yourself things like it must've been actors playing to a hidden camera and they must've used some professional trick to momentarily distract you while they did their vanishing act.

And maybe it was, in some instances, but there're some parts of Liverpool and London so open such explanations are absolutely preposterous.

p.s. Pappy, I see what you mean in blog 912 about George Evans and expressive eyes, though I think his expertise in expressive body language goes some way to enhancing the effect of the eyes.

Borky, do you have a blog or website, write books, short stories, articles for Fortean Times or otherwise write down your experiences in "interacting with or observing 'people' resembling the likes of Victorians, Roman soldiers or Elizabethans"?

You have piqued my curiosity.

Hello from Finland. I remember reading this Vanishing Hitchhiker story when I was a kid. I purchased the Comic Book named "Kummitukset" (Ghosts) on late 50's and this story was the best one. Thank you so much.