Sheldon Moldoff takes us through the Doorway to Horror!


When I first encountered organized comics fandom in its early phase, 1961, there was a focus on the DC superhero comics of the early '40s, specifically All Star Comics, and Max Gaines' All-American line of DC's superheroes. Sheldon "Shelly" Moldoff, who was born in 1920, was one of the earliest of the stars of DC Comics, drawing lots of covers but best known in 1961 for the work he had done 20 years prior on Hawkman. He was revered for Hawkman. He used a lot of swipes from Alex Raymond's Flash Gordon, but to be fair, everybody swiped. At the same time he was being revered for that earlier work, he was being reviled for his then-current work, as Bob Kane's ghost on Batman. The fans who loved his stuff didn't know he was the same guy they hated.

If you read Moldoff's version of things, he was an idea man as well as an artist. He came up with the idea for horror comics, pitching the idea to Bill Gaines, who--according to Shelly--took the idea and ran with it, leaving Moldoff drinking from his cup of bitter gall.* Oh well…you win a few, you lose a lot. Moldoff took his ideas to Fawcett, and after EC's horror comics took off, Fawcett published his horror stories.

This story, "Doorway to Horror," from Fawcett's Worlds Beyond #1, dated November, 1951, is a fairly typical story, but it's a good solid entry in the horror comics annals. 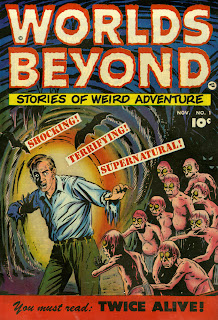 Shelly also drew the cover. Click on it to see it full size. It illustrates a story done by Bob Powell and posted in Pappy's #110.

Sheldon Moldoff was one of the cartoonists who made the Golden Age what it was. He and his peers worked hard for little money, they made their deadlines, they weren't flashy, but they were professional and dependable. In my opinion, "Doorway to Horror" is one of Shelly's better jobs. I think he enjoyed the horror work, the deep shadows, the whole noir atmosphere. It may have been in an artistic sense what would have attracted him to Batman. 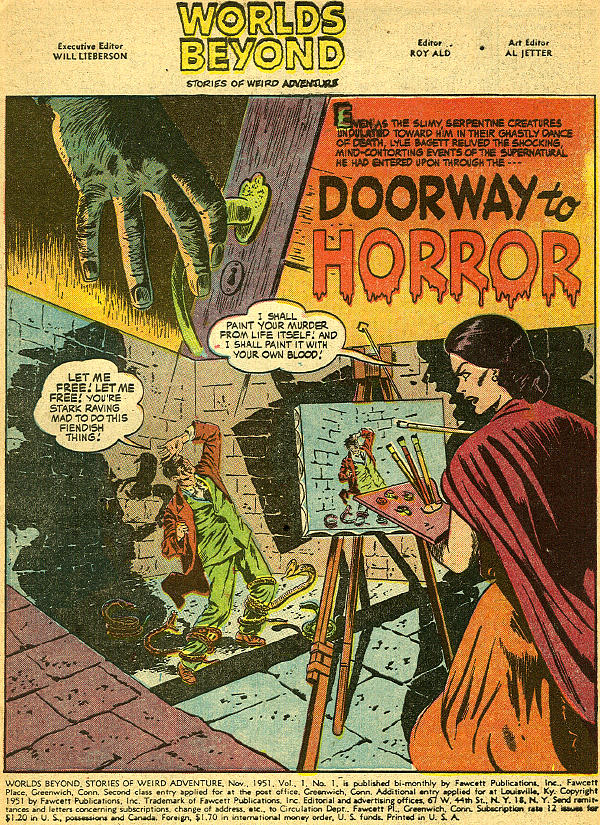 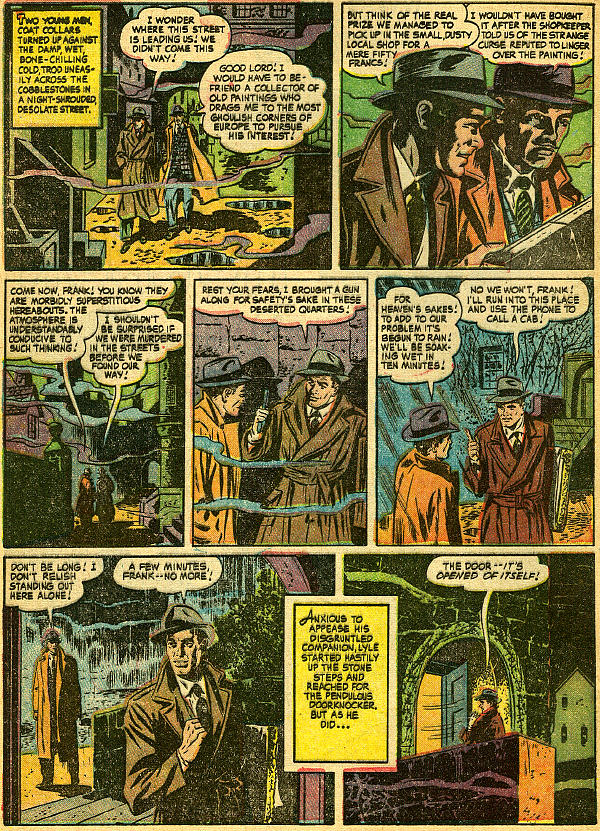 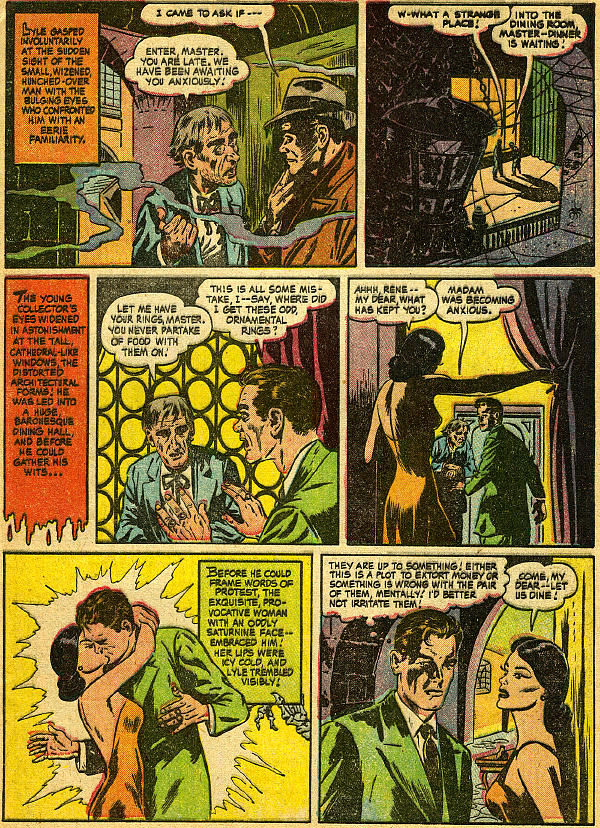 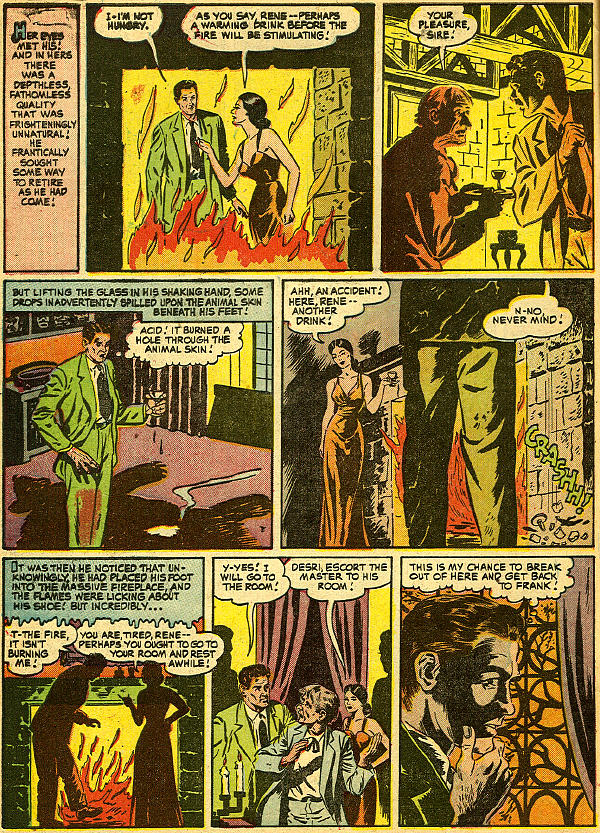 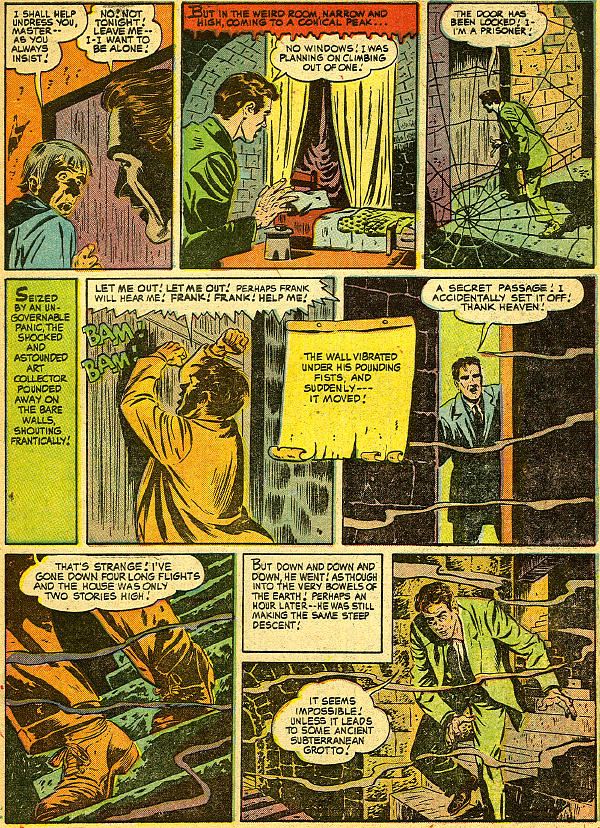 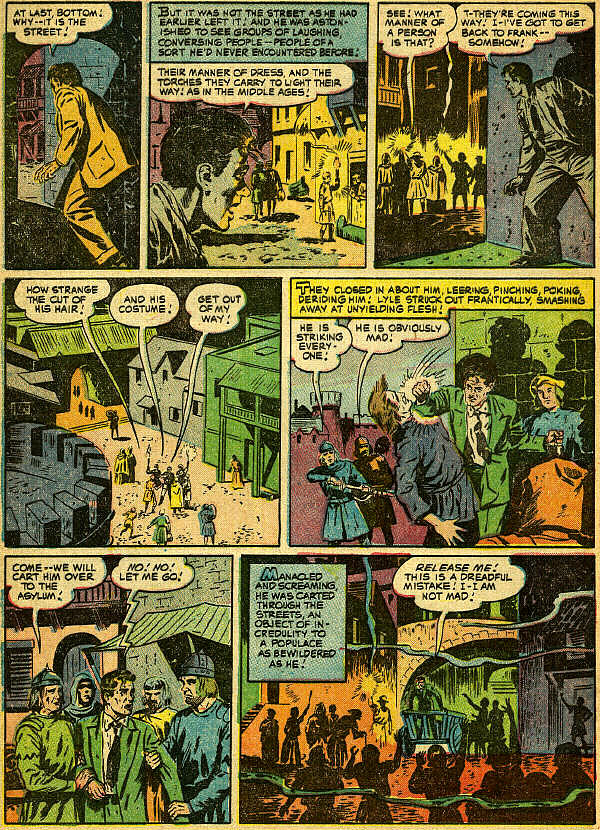 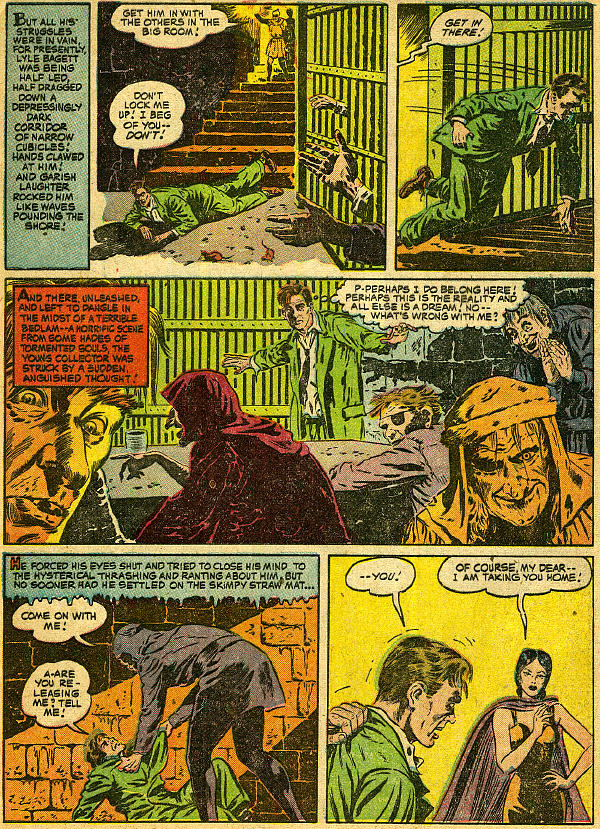 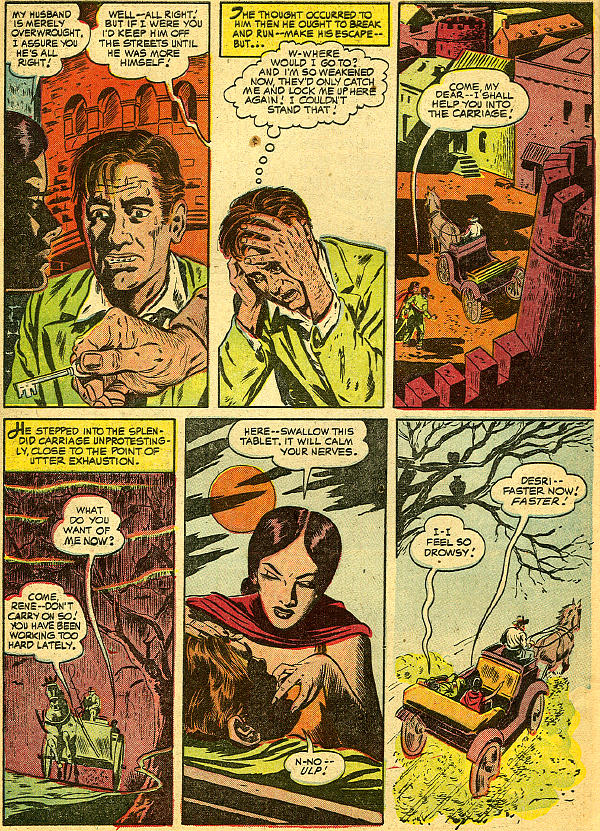 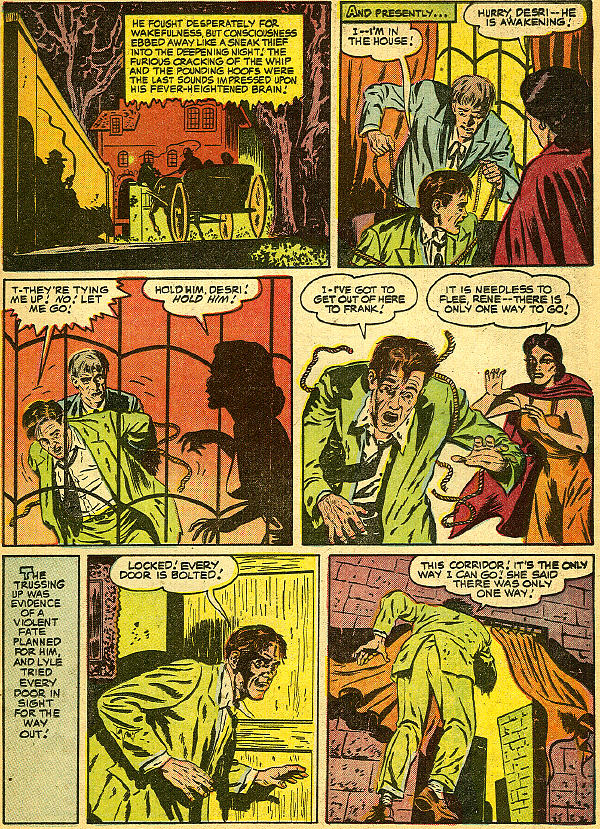 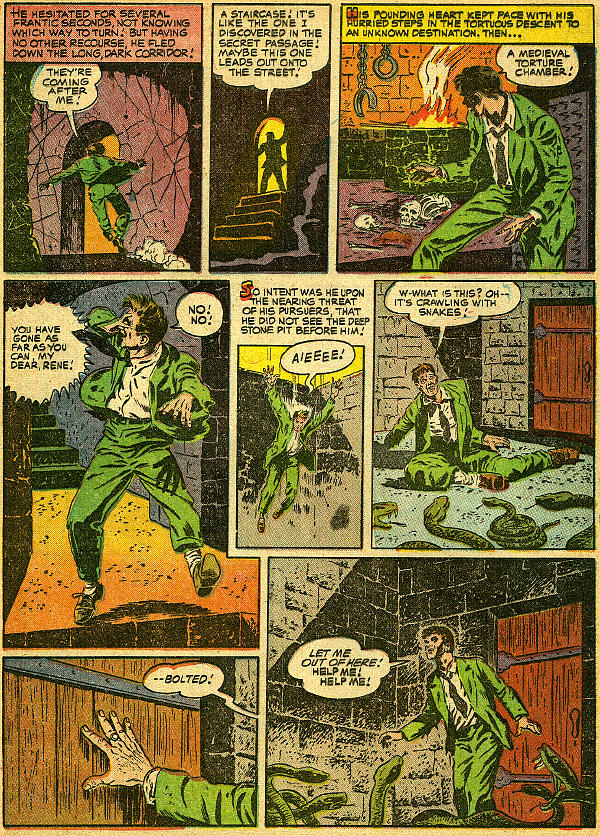 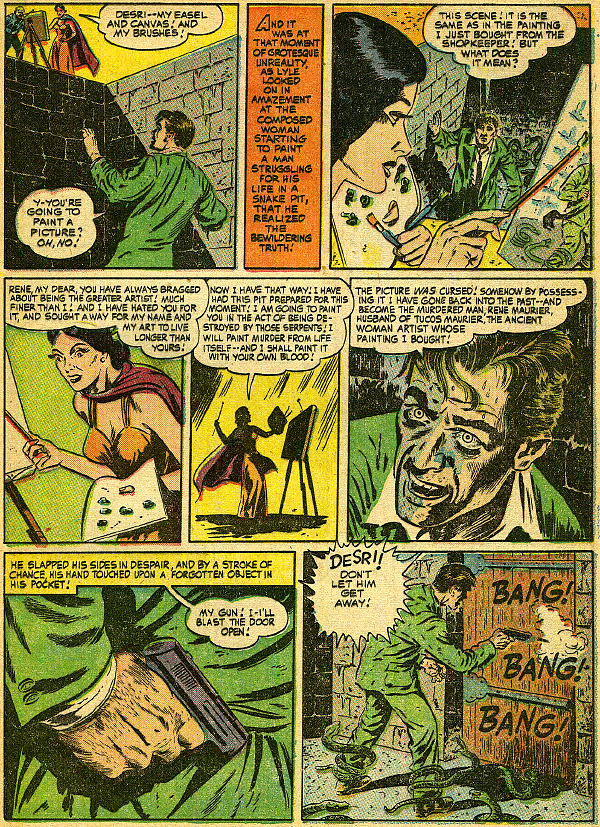 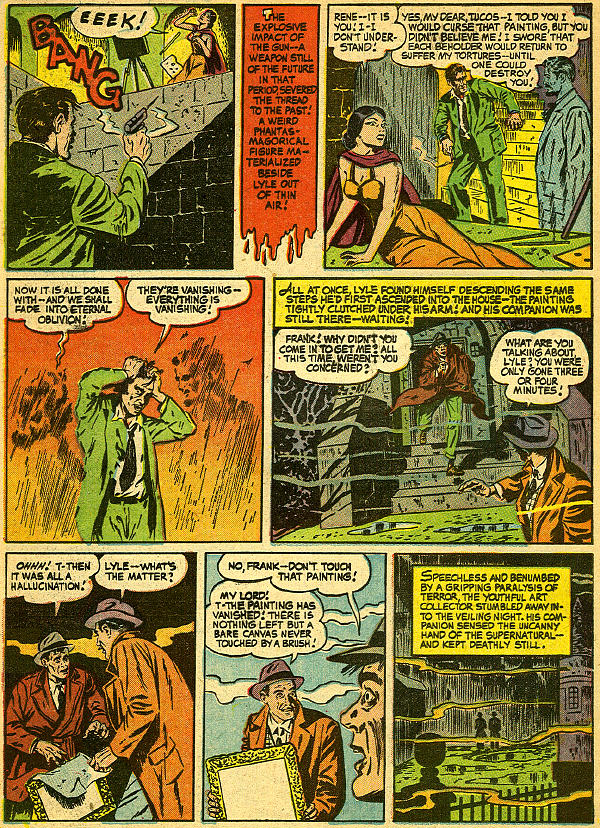 *Tales Of Terror!/The EC Companion By Fred von Bernewitz and Grant Geissman, Fantagraphics Books, 2000.
Posted by Pappy at 3:30 AM